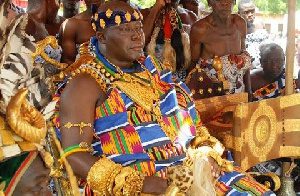 He also charged some of traditional authorities whose activities are causing degradation of natural resources to stay away from it and come on board to support the worth cost of planting more trees to be lead by forestry commission.

Otumfuo Osei Tutu II was speaking to a delegation from Forestry Commission led by Mr Kwadwo Owusu Afriyie a.k.a Sir John at Manhyia Palace- when the team paid a courtesy call on him to explain to him measures adopted by the commission together with Manhyia Palace towards the Lake Bosomtwe Landscape Restoration Project, being implemented by the traditional ruler.

The project is in collaboration with Oheneba Poku Foundation and seeks to plant some 2.5 million trees over a five-year period in Lake Bosomtwe basin.

The landscape restoration intervention project will cover around 4,000 hectares.

The project would ultimately help contribute to improve the ecosystem, service provision, climate change mitigation, and improved environmental consciousness among inhabitants of fringe communities around the lake.

Other stakeholders include the Forestry Commission, the Environmental Protection Agency (EPA), the Water Resources Commission, the Ghana Tourism Authority, UNESCO, the District Assemblies of Bosome-Freho and Bosumtwe, and the Lake Bosomtwe Community Resources Management Areas (CREMA), an NGO.

The project will adopt multiple schemes for tree planting, particularly a mixture of agro-forestry and pure plantation approaches will be adopted.

The delegation was also at the palace to pay homage to the Asantehene, who sat in state to receive visitors in commemoration of the Awukudae.

The Asantehene said there was the need for authorities to do much more to prevent the wanton destruction of Ghana’s forest reserves and charged the Commission to strictly enforce the laws on the illegal logging of trees.

Otumfuo Osei Tutu II stressed the need for the Forestry Commission to strictly deal with people who cut down trees illegally.

He commended the Commission for the interest in the Project and further asked them to liaise with the Amakomhene, Nana Adu Mensah Asare, who is the Chairman for the Implementation to determine when to plant the first tree to signify the commencement of the project.

On his part, the CEO of Forestry Commission, Mr Kwadwo Owusu Afriyie assured Otumfuo that his outfit would work assiduously to protect and preserve Ghana’s forestry reserves in the region.

He revealed the commission would provide the 2.5 million seedlings for the project.

Issue all checks in name of PDS-ECG, PDS agree on interim measures