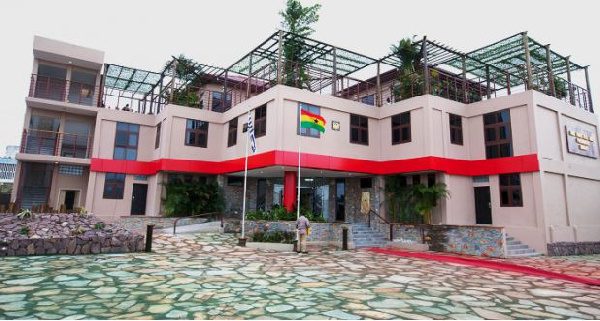 The Atta-Mills Memorial Institute has disassociated itself from the funding brouhaha of the Atta Mills Library.

The Institute says it has nothing to do with the funding and the non-payment of the contractor who put up the library.

The John Evans Atta Mills Presidential Library, a memorial and research facility in Cape Coast was completed and inaugurated about three years ago.

However, the facility is rotting away.

The contractor who constructed the facility has held on to the keys for alleged non-payment for work done.

In June this year, the contractor in an interview Daily Graphic indicated that he would only release the keys after receiving his payment for work done.

“The keys are in my pocket; I will not release them until I am fully paid,” Mr Kojo Mamphey told the Daily Graphic.

Ghanaians have expressed disappointment due the fact that the contractor has not being paid although the funding for the project was fully catered for.

Some have quizzed why the telecom industry and one other individual funded the project but the contractor was yet to be paid after three years of work done.

Information available to Rainbow Radio has it that Mr. Totobi Quakyi was in charge of the Planning Committee and funding processes.

However, Koku Anyidoho, who is the Chief Executive Officer (CEO) of the Atta-Mills Institute says although he worked with pride as member of the planning committee, he distances himself from the funding process because he knew nothing about it.

The Telcom Chambers and one Madam Catharine Uju Efejika funded the library project.

Some residents in the community have said immediate answers needed to be given as to why the library complex was commissioned by then President John Dramani Mahama without full payment made to the contractor.

Some have also quizzed whether the former president was misled into commissioning the project.

Former President John Dramani Mahama inaugurated the library on July 24, 2016 to coincide with the fourth anniversary of the death of President Mills.

On that day he had said: “This library should be the presidential library befitting the life of Prof. Mills as a renowned academic, sportsman, politician, President and peace-loving Ghanaian.”

It has a 100-capacity auditorium, a 45-seater multi-media centre, seminar rooms and a museum that holds historical materials that reflect the life and works of the late President.

The edifice also has a virtual sound room that echoes the voice of Prof. Mills in his memorable speeches and images that bring to life his sojourn as a celebrated academic, keen sportsman, humble politician, devout Christian, servant leader, President and peace-loving Ghanaian.

Although not a typical book library, the facility will preserve and make available the papers, records, collections and historical materials of President Mills and other prominent African intellectuals and political leaders.

“1.2 Million Children To Be Beneficiaries Of Free Shs From September” – President Akufo-Addo

The debt you owe Gold Coast is not my money, they’re for customers so pay-Nduom to gov’t