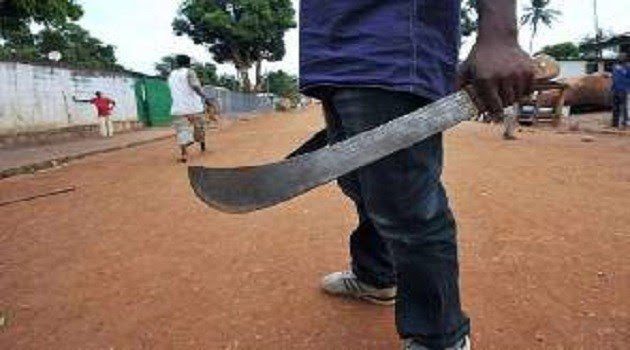 Achiaman Regent In Tears Over “Landguardism”

Regent of Achiaman, a suburb of Amassman-Accra, Daniel Nii Amartey Armah (Nii Oshipi) has explained what is referred to as landguard started as development levy which paid off for that community.

Nii Oshipi says he does not know what the case was with other areas in the country, but the Achiaman enclave had raised funds through the flexible levy system to undertake a few projects such as electrification until perpetrators invaded with their unfortunate behaviour.

Nii Oshipi believes chiefs have always gingered the youth to do this, therefore, the very chiefs need to be asked to control any formed gang at their disposal to put stop to this.

The traditional ruler said Ghanaians must rise against any form of abuse of act of vandalism by landguards.

The passage of the Vigilantism Bill has proposed a solution where landguards would be made to serve jail terms.

The minimum jail sentence for an offender who is prosecuted for offences related to land guarding is 10 years.

A land guard who goes to land to terrorize people wielding a gun is liable to a maximum jail term of 25 years.The need for the Vigilante Law is in fulfillment of a pledge by Nana Addo Danquah Akufo-Addo, during the presentation of the February 2019 State of the Nation Address, to cause Parliament to enact legislation to deal with acts of vigilantism in the country.

It was occasioned by the bloody clash between National Security Operatives and Members of the National Democratic Congress on January 31, 2019, Ayawaso West Wuogon By-election.