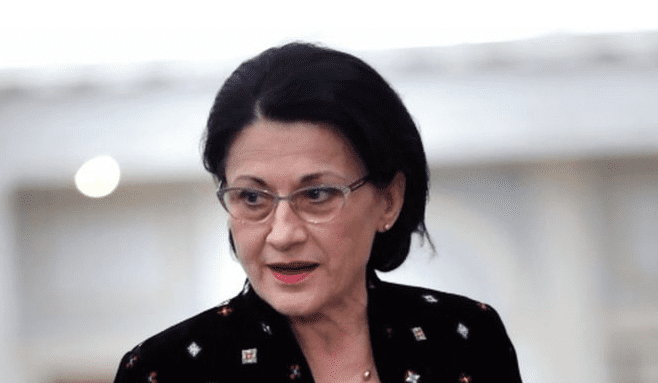 Romania’s prime minister has fired her education minister over her “deeply wrong” comments about a kidnapping case.

In a TV interview earlier this week, Ecaterina Andronescu said she was taught “not to get in cars with strangers”.

The Romanian Prime Minister, Viorica Dancila, said Ecaterina Andronescu’s remarks about a teen’s abduction show a “lack of understanding”. Ms Andronescu has said she did not intend to blame the victim or her parents.

The education minister is the latest Romanian government official to lose her job over the case, which has caused public outcry.

Romania’s police chief Ioan Buda has been sacked and interior minister Nicolae Moga has stepped down, but critics are demanding more resignations.

Authorities have been criticised for what is seen as their slow response to Alexandra’s three emergency calls.

What happened to Alexandra?

Alexandra disappeared last Wednesday while hitchhiking to her home in the southern city of Caracal, police said.

On Tuesday, Alexandra’s uncle, Alexandru Cumpanasu, released what he said was a transcript of her calls to emergency number 112.

In one conversation, she pleaded with an officer to “please stay with me on the line, I’m really scared”, only to be told other calls were being dealt with, according to the transcript.

Who is the suspect?

Suspect Gheorghe Dinca, who is in custody, has told police he killed Alexandra.

The 65-year-old also admitted killing another teenage girl, 18-year-old Luiza Melencu, who has been missing since April.

Initially, police did not rule out the possibility Alexandra was still alive.

But in a statement on Saturday, the organised crime unit leading the investigation said laboratory analysis so far found “the genetic profile of one person, Alexandra Macesanu”.

Her uncle Alexandru Cumpanasu, who has been acting as a spokesman for the family, wrote on Facebook: “I couldn’t save this wonderful child’s life.

Protesters chant “resign” at a rally following alleged mishandling of the case
Locals in Caracal, whose population is around 30,000, told AFP news agency that Alexandra’s case has eroded their trust in authorities.

“I’m afraid to walk down the streets, you can imagine. We never saw such a thing in our town”, a woman living near the suspect’s house said.