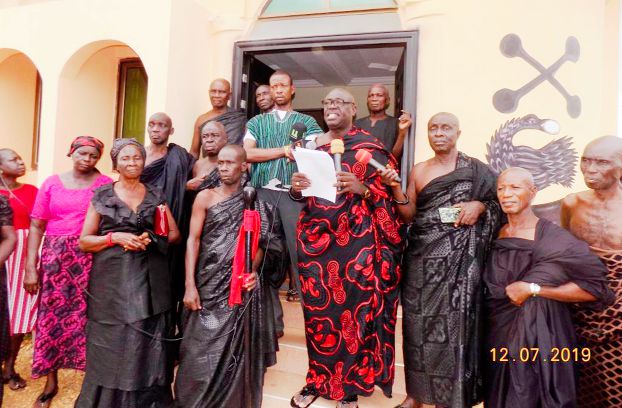 The Kwaebibirem Municipal Assembly served caution will deal with persons found to have breached the peace of Kade and its environs.

The notice serve follows a meeting held between the Eastern Regional Council and two factions to the Kade Chieftaincy dispute.

The notice stressed it will deal in accordance with the law persons found breaching the peace of Kade.

The directive the notice said was applicable to all occasions henceforth.

Meanwhile, another letter from the Attorney General’s Office has also noted that the status quo of the capacity of Osaberima Agyare Tenadu II as Chief of Akyem Kade remains intact until the determination of the retrial ordered by the Judicial Committee of the Eastern Regional House of Chiefs says otherwise.

It has also strongly declared that the installation of Osaberima Asare Twum must not be given any legal recognition and any criminal conducts or acts that may have arisen out of this installation must be reported to the police for an action to be taken.

The two factions have further been asked to maintain the peace and tranquility of the Kade Traditional Area and abide by the decision of the Judicial Committee of the Eastern Regional House of Chiefs.

The letter said the earlier decision by the the Council in on 05/12/2013 which included the decision to destool Osaberima Tenadu II was the subject of the appeal before the Judicial Committee.

The High Court few months ago granted an order of an interlocutory injunction which has ordered that the defendants whether by themselves, their supporters, agents, servants or whatsoever are restrained from entering and or taking possession of the old Chief’s palace at Kade or any regalia of the Kade stool from undertaking any activities or action that will create disorder, foment trouble or threaten loss of life and or destruction of property at Kade pending the determination of the suit.

Following this decision, the faction belonging to Ohemaa Akua Fosua, a party to case were also advised to abide to the terms of the interlocutory injunction.

On the 8th May 2019 the Judicial Committee of the Eastern Regional House of Chiefs in its judgment  set aside the entire proceedings and judgment of the trial of the Judicial; Committee and its place ordered a retrial of all issues canvassed at the trial at the appropriate forum.

Currewntly, there is a case pending in court where the Kadehene, Osaberima Tenadu II avers that the retrial of the Judicial Committee of the Eastern Regional House of Chiefs has not taken place yet.

He also avers that the defendants and their agents recently, after the decision of the Judicial Committee of the Regional House of Chiefs, unlawful and forcibly took over physical possession of the old Chief’s Place of Kade and threatened to foment trouble and civil unrest in the town.

The plaintiff is therefore seeking a declaration that the invasion and takeover of the old palace at Kade by the defendants and their agents are unlawful.

He is also seeking an order of perpetual injunction to restrain the defendants, by themselves, their agents, privies, servants, assigns and whosoever from entering and or taking possession of the old chief’s palace at Kade or any regalia of the Kade stool.

Aside from these declarations, he is also seeking an order of perpetual injunction to restrain the defendants, by themselves, agents, privies, servants, assigns, and whosoever, from undertaking any activities or actions that will create disorder, foment trouble or threaten loss of life and or destruction of property at Kade.

It all started when Obaapanyin Akua Fosua, Abusuapanyin Otibu Asare, Nana Banchie Darko Ampem, Krontihene, Asafoatse Kofi Tinyase and Asafoatse Yaw Danso on 9th October 2012, called on the Akyem Abuakwa Traditional Council to address the violation of the traditional oath and failure by the then- chief to uphold all norms required of him as chief of the town.

They alleged that Osabarima Agyare Tenadu II, who was a defendant in the matter, had violated the code of ethics governing the chieftaincy institution and that the refusal of the kingmakers from taking the necessary action, allowed any principal to institute that action.

To buttress their stand, they referred to the ruling by the Judicial Committee of the Akyem Abuakwa council on the 1st of May, 2001 in the matter of Nana Kwame Fanti Aduamoah II, Asonafohene of Kade (plaintiff) Vrs Nana Agyakoran Adutwum II Kadehene (Defendant) which plaintiff tendered as exhibit “A” attached to their Affidavit in support.

According to them “the Ghana law report of 1977 page 348 paragraph 3 supports the contention that even the Krontihene alone who is a kingmaker can bring up an action”.

The chief argued that that the claim of embezzlement against him was absolute false and that the bank statement the defendant tendered in court as exhibit did not tally with any transaction of the Kade Stool Account.

The Chairman of the Judicial Committee of the Akyem Abuakwa Traditional Council, Osaberima Kwame Koh II, giving his ruling at a sitting at Ofori Panyin Fie in Kibi, noted that the judicial committee found the Chief guilty of 14; out of the 17 charges leveled against him.

Also, the committee ruled that the exhibit by the defendant (Osaberimah Agyare Tenadu II) did not relate to the matter before the judicial committee and ordered for a custom to be performed to destool the defendant and a replacement made by the kingmakers.

The council also ordered Osaberimah Agyare Tenadu II, to hand over all the stool paraphernalia to the Abusuapanyin for safe keeping until a new Chief was enstooled to wish he obliged.

CPP is dead, its no longer a party & it must be dissolved- Kyiri Abosom