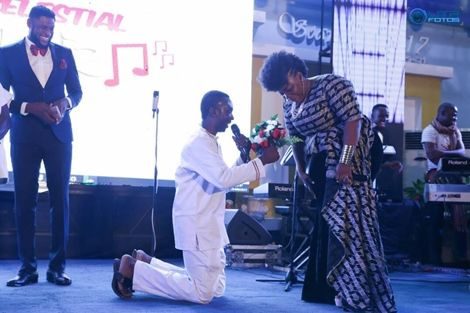 Ghanaian gospel musician Celestine Donkor has eulogised the husband, Kofi Donkor for the sacrifices he has put in her career as a musician.

Speaking in an interview with Sokoohemaa Kukua on the Mid-morning Show on Rainbow Radio 87.5Fm, Celestine Donkor said she least expected the husband would have to fall in love with her music career.

But she says the husband has partnered with God to take her music career to another level.

According to her, the husband has been supportive and encouraged her in the most difficult times.

‘’My husband was a divine gift from God because he’s partnered with God to take my ministry forward. I have also discovered he is in a serious partnership with God,’’ she said.

Celestine Donkor maintained the husband is jovial and his trait lightens up the atmosphere whenever she was down.

Celestine Donkor has been married to Mr. Kofi Donkor for 14 years and have three children.