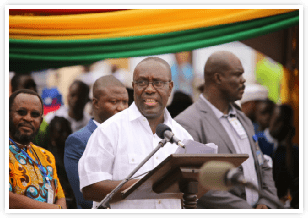 The Trades Union Congress (TUC) has said the mid-year budget review presented in Parliament by Finance Minister Ken Ofori-Atta did not contain a robust analysis of the impact of the positive developments in macroeconomic management on job creation.

The Minister presenting the mid-year budget review last month said: ‘’In the 2019 Budget statement, government announced its intention to recruit and place into active work, 100,000 young tertiary graduates for a maximum of 36 months. As at mid-year, 97,373 beneficiaries had been placed under the seven modules of the scheme across the country. Mr. Speaker, government established a virtual training portal, the NABCO Talent Academy, to further enhance the skills of beneficiaries and position them for permanent employment and entrepreneurship.’’

But reacting to the presentation, the TUC said: ‘’The statement the Honourable Minister presented to Parliament did not contain any robust analysis of the impact of the positive developments in macroeconomic management on job creation.  The economy is growing and wealth is being created so it may be assumed that these positive developments at the macro level would translate into job creation.”

In the view of the TUC, ”The theory that economic growth automatically leads to employment growth has been debunked many years ago. Countries that have translated economic growth into more decent jobs have done so deliberately. That is what we should do in Ghana. Otherwise, it will never happen. We do appreciate the effort being made under the NABCO and all the other initiatives to create jobs. Given the enormity of the employment problem in Ghana, we need an Akufo-Addo Plan similar to the Marshall Plan in order to make a significant impact on the employment situation in the country.

Meanwhile, Employment Minister Mr. Ignatius Baffour-Awuah, recently announced that 611,397 new jobs have been created in the formal sector resulting in a decline in unemployment.

According to him, the increase is as a result of the numerous flagship policies introduced by the government as captured in the Coordinated Programmes for Economic and Social Development Policies (2017-2024) and the National Medium-Term Development Framework (2018-2021).

Taking his turn at the meet-the-press series in Accra on Thursday, the Minister said out of the 611,397 new jobs created, the Ministries, Departments and Agency employed 343,458 while 267,939 has been absorbed by the private sector.

Mr. Baffour Awuah noted that the services sector constituted a major source of employment accounting for 49 percent — 19 percent in trade and 30 percent in other services.

This is followed by agriculture, 38 percent and industry, 13 percent, which comprises 8 percent manufacturing and 5 percent for other industries.

The Minister explained that the working-age population is estimated at 17.6 million. Out of this, 11.06 million people, representing 63 percent are in different types and forms of employment.

“A total of 1.14 million people, representing about 6 percent are working voluntarily and therefore not considered to be in employment as per the International Labour Organization (ILO) definition of employment. The remaining 5.36 million people are not working because of schooling, incapacitation, domestic activities, seeking employment or are discouraged,” the Minister stated.