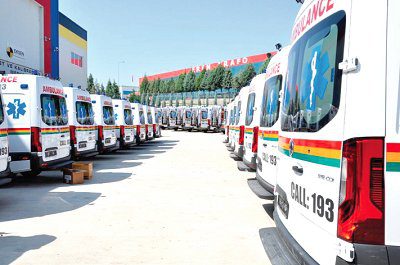 First batch of 48 ambulances for constituencies to arrive soon

The first batch of 48 ambulances out of 275 for each constituency is expected in the country soon.

The ambulances were procured under the one-constituency one-ambulance project, which is aimed at ensuring that medical emergencies were handled more efficiently and effectively.

The Chief Executive Officer (CEO) of the National Ambulance Service (NAS), Prof. Ahmed Nuhu Zakaria, told the Daily Graphic yesterday that the vehicles had left Turkey and would reach the Tema Port next month.

“This is good news to the National Ambulance Service and the entire nation because it’s a big project that is going to change the face of emergency response for the better,” he said.

According to him, considering the importance of the initiative, the government had to review its initial plan to purchase 275 ambulances to 307.

“Ghana’s Emergency Response Service has been going through some difficult times with depleted fleet. Currently, more than 100 ambulances are not roadworthy,” he said.

Prof. Zakaria said for a country with an estimated population of 29 million, an ambulance strength that was fluctuating between 50 and 60 was not good enough.

“It is woefully inadequate and so it will be a huge relief when the new ambulances arrive,” he said.

He said it was the government’s intention to have the ambulances by the middle of last year but procurement challenges delayed the process.

The CEO of the National Ambulance Service said the 48 ambulances would not be distributed to the constituencies immediately.

“The actual distribution will start when all the 275 ambulances arrive by the end of this year.

“Yes, they are coming in batches and we are getting ready to put them on the road once the full complement arrives in the country,” he said.

Prof. Zakaria said the ambulances were high-performance vehicles and good for the Ghanaian terrain.

“These are strong, durable ambulances and will help the country a lot,” he said.

The chassis of the vehicles, he said, were manufactured in Germany.